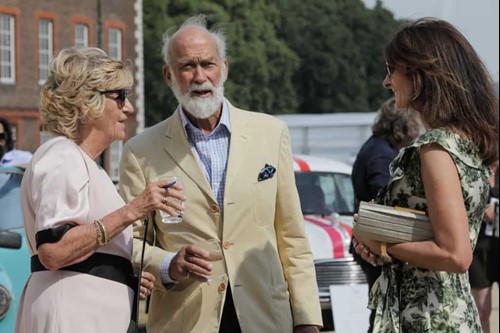 Yesterday afternoon HRH Prince Michael of Kent was joined by Lady Marina Windsor, Annabel Elliot, Honorary Life Patron of Elephant Family and sister of the late charity Founder, Mark Shand, and Ayesha Shand, daughter of Mark, at Elephant Family’s Concours d’éléphant gala dinner and auction. A host of star-studded guests, including Nicholas Coleridge, Gaj Singh Maharaja of Jodhpur, and Damian & Victoria Aspinall, gathered at the Royal Hospital Chelsea to celebrate the charity’s 15th Anniversary (and what would have been Mark Shands 67th birthday), and vie for ownership of one of the illustrious customised Indian vehicles from the beautifully decorated Concours d’éléphant fleet. The evening drove home a strong conservation message, raising over £250,000, which will continue to fund the protection of Asia’s rapidly dwindling elephant population.

ollowing the prize-giving the guests were called to dinner in the Great Hall and were inspired by a film highlighting the charity’s conservation work. The auction, led by the irrepressible Lord Dalmeny, chairman of the British branch of Sotheby’s, drew a flurry of bids for the vehicles with the customised Kandula by Paul Beamish of Krazy Horse going under the hammer for £11,000 and Chandrika by Amrapali with its stunning ruby and emerald necklace, fetching £45,000 while a fabulous elephant sculpture inspired by HH Maharaja Gai Singh II of Jodphur and Marwar sold for £8,000.